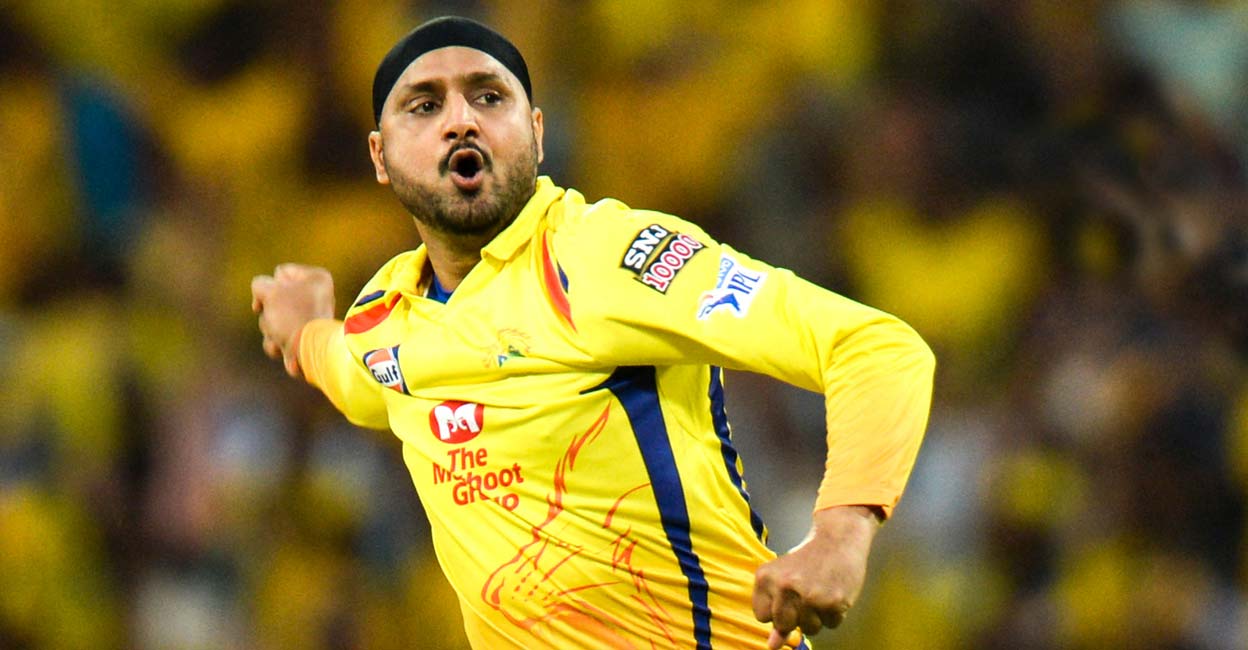 Harhbajan Singh celebrates a wicket during the 2019 IPL match between Chennai Super Kings and Kings XI Punjab at the M.A. Chidambaram Stadium in Chennai on April 06, 2019. Photo: Arun Sankar/AFP

Harbhajan Singh, also called “Bhajji” and “The Turbanator,” is an Indian cricketer who is second only to Sri Lanka’s Muttiah Muralitharan for most off-spin wickets taken in Tests. Singh played in the Indian Premier League for ten years with the Mumbai Indians before he moved to the Chennai Super Kings. Spin bowling specialist didn’t let down then-captain Sourav Ganguly when he was brought in to replace Anil Kumble in the Border-Gavaskar Trophy match against Australia in 2001, even though he got off to a bad start and his bowling motion caused some controversy.

As his career went on, he was involved in a number of scandals, such as “Monkey-gate” with Australian Andrew Symonds and “Slap-gate” with Indian colleague Sreesanth. Even now, after Kumble has retired, the well-known spinner often puts Singh in the shade. In Tests, he has gotten rid of the former Australian captain Ricky Ponting ten times. This is just one of many amazing things he has done. The ODI cricket quiz is the best way to learn about the player’s career.

Early Life and Growing Up

Harbhajan wanted to be a batsman and was working with coach Charanjit Singh Bhullar before he started training as a spin bowler with coach Davinder Arora. Harbhajan became more interested in off-spin bowling after Bhullar died too soon. His dad really wanted him to become a professional cricket player instead of joining the family business.

Harbhajan Singh played his first game for Punjab’s Under-16s team at home against Haryana in November 1995. He was only 15 years old at the time. After taking 32 wickets and scoring 96 runs, the North Zone U-16s picked him up, and the national U-19s asked him to play in an ODI against South Africa with them.

Harbhajan Singh was chosen to play in a warmup match between the Indian Board President’s XI and a visiting Australian team before the 1997–98 Test series. Because he did so badly in the practice match, he wasn’t allowed to play in the first two Tests. In his first international game, on March 25, 1998, during the third Test, he only took one wicket. After not being picked for the home series against India, Australia, and Zimbabwe, he played his first ODI match against New Zealand in Sharjah in April.

Singh’s professional career got off to a rough start in 1998, so he was put on the bench for a while. He came back for the Singer Trophy. In six games, he took eight wickets, but he didn’t get any in the championship game. He wasn’t picked for the Sahara Cup team after that, but he still played for India at the 1998 Commonwealth Games.

In the 1998–1999 season, he played his last One-Day International (ODI) for India against Zimbabwe. After that, he went back to playing cricket at home. After taking 4/91 for the Board President’s XI in the 1999 home series against New Zealand, he was kept on for the second Test series. So, at the end of two games, he had six wickets.

When Anil Kumble got hurt during the Border-Gavaskar Trophy in 2001, India’s captain at the time, Sourav Ganguly, called Singh out of the blue and asked him to lead the spin attack against Australia. Singh helped India win the series 2-1 by taking 32 wickets. He was the first Indian player to score three times in a Test, and he also won “Man of the Series.”

Even though he had trouble in one-day internationals that year, Singh took 11 wickets in seven matches on Sri Lanka’s spin-friendly ground. Soon after that, he played a Test match against England at Mohali, his home ground, and took 7/110, including 5/51 in the first innings. In the next game, he again took five wickets.

He was a good bowler when India went to Zimbabwe in 2001, but he got hurt in the middle of 2002, which made it hard for him to get wickets until the last match, where he got eight. In Test matches against England, the NatWest Series, and the 2002 ICC Champions Trophy in Sri Lanka, he had average results.

After having trouble in the first Test in India against the West Indies, he found his footing and did well in the second. He was named “Man of the Match” for the series because he had 20 wickets and 69 runs. He played a lot in the 2003 World Cup. He took 11 wickets and had an economy rate of 3.92.

Singh hurt his finger during the World Cup in 2003, but instead of having surgery to fix it, he chose to get physiotherapy instead. His health got worse to the point where he needed major surgery that took him out of action for seven months.

Harbhajan got back in shape when he played for India in the Asia Cup in July 2004 and the ICC Champions Trophy that same year. Even though he did well with both the bat and the ball in his first Test back against Australia, his team still lost the series 2-1.

As the season came to an end, he played worse than usual, so he spent the offseason practising with the English county team, Surrey. In one of the worst scandals in the history of Indian cricket, he openly criticised the new coach Greg Chappell and the captain at the time, Ganguly. After that, he did very well against Sri Lanka in Test and One-Day International (ODI) matches in 2005.

Singh’s play started to get worse in 2006, and by the 2007 World Cup, he had been taken off the team. But he was an important part of India’s win at the ICC World Twenty20. In 2008, he took the most wickets for India and was the third-highest wicket-taker in the world. This was due to his consistent, game-changing work throughout the year.

Singh and Andrew Symonds, an all-rounder from Australia, talked before a Border-Gavaskar Trophy test match in 2007–08. Symonds said that when Singh called him a monkey, it was a racist thing to say. The Indian team threatened to bow out of the series when Singh was suspended for three games. India won the series 2-1 in the end, and Singh’s ban was lifted after that.

India was kicked out of the 2009 Twenty20 World Cup at the group stage because of how poorly he played. He didn’t do well in the ICC Champions Trophy in 2009, but in 2010, he was back to his old self. He was on the Indian team that won the World Cup in 2011, but he was hurt and couldn’t play in the next series.

Then, he focused on the IPL, where he led the Mumbai Indians to the Champions League Twenty20 title in 2011. Due to his success in the IPL in 2014 and 2015, he was given another chance to play on the international stage. He quickly passed Wasim Akram to become the ninth-highest wicket-taker in Test cricket history.

In 2015, he was part of the Indian Test team that played against Sri Lanka. After Ravichandran Ashwin got hurt in the ODI series against South Africa, he was brought in to play all three positions. Later, Singh played in the 2016 Asia Cup (T20) in Bangladesh, as well as three T20 matches against Australia, a T20 series against Sri Lanka at home, and the 2016 Asia Cup (T20) in South Africa. He will be playing for the United States at the T20 World Cup in India this year. Even though he was a regular part of the Indian team for many series, he was rarely used as a starter.

Know all about cricket news and updates at CBTF news.

Get the fastest cricket news update at https://cbtfspeednews.com/.

Know all about cricket betting and updates at CBTF betting.

Get the updated expert betting tips at https://cricketbettingtipsfree.com/

Checkout our videos to get the latest updates about cricket and betting tips, and casino

tips to win big with expert opinions at https://www.cbtfmytube.com/.